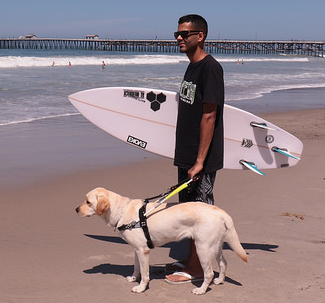 “I just want to show everyone what we can do when we have faith.” – Derek Rabelo, Guide Dogs of America Graduate Class #405

GDA graduate Derek Rabelo has always been close with his father. “I may make fun of his big belly now, but we are best friends. He’s my hero and he has always encouraged me to do anything.” Before Derek was even born, his father had dreams of his son becoming a pro surfer. He even named his son after champion surfer Derek Ho. However, due to congenital glaucoma, Derek was born blind.

It goes without saying that surfing is a dangerous sport. In split seconds a crashing wave can slam a surfer against the ocean floor, or drown him. Everyone warned Derek that without being able to see a wave break, surfing was just too dangerous. Tired of being told he couldn’t do something, at age 17 Rabelo decided to make his father’s dream come true and took up surfing. “I wanted to show everyone what a blind man can do.”

Derek worked every day on his surfing with family, friends and coaches. It wasn’t until a video of him surfing went viral in 2012 that everything changed. Overnight, Derek became an inspiration to surfers all over the world, including pro champions Kelly Slater, Damien Hobgood, Laird Hamilton and Rob Machado, just to name a few.  No one could comprehend how a blind man could surf. But, to Derek, his blindness gives him an advantage. “I can’t see the waves like you do, but I can feel them and hear them better than you can.” Surfing has taken Derek to heights beyond his wildest dreams. He has gone on to be featured by World Surf League and Surf Channel Network, and  he even inspired a movie “Beyond Sight,” a documentary of his journey to riding Pipeline on the North Shore of Oahu.

It was while on a world tour promoting this documentary that Derek met his wife, Madeline, who this past spring came up with the perfect surprise for Derek’s birthday…a guide dog! She had it all planned out. She would submit Derek’s application to GDA without him knowing and pick up the dog to surprise him at his birthday party. Everything was going according to plan until Madeline learned that Derek would have to come and stay with us on campus for three weeks of training. The secret was out, but Derek was overjoyed to find out that he would be receiving his first guide dog.

With a last minute opening, Derek was accepted to our June class #405. He was matched with a sweet, yellow lab, “Serenity.” The two took off blazing a pace that had trainers running to keep up with them. When asked what he liked most about class, Derek remarked, “The instructors were so incredible at teaching me how to bond with my dog. They really took the time to listen to what I need in my life. It was so special seeing how much I could learn in such a short amount of time.” Continuing on about his experience at GDA, Rabelo said, “Class was seriously amazing. We had so much fun hanging out and talking to other students about our journeys, I actually really miss being in class. When is the next class? Maybe I can come back and just hangout, I loved it that much.”

Since returning home with Serenity, Derek has quickly realized the benefits of having a guide dog. “It’s been amazing to be back home. At times it has been a little frustrating, but I can see her developing every day, how amazing this dog really is. She’s doing great and getting better each day. To walk on sidewalkless streets down to the beach is so much easier. Once I go to a certain place one time, Serenity knows I want to go there when we go back. She gives me much more freedom and mobility to go where I want to go. She gives me a lot of confidence and I trust her. Our relationship is growing every day.”

Derek’s daily schedule is jam packed between, surfing, Madeline, Serenity, and his work at a local church. But that does not stop him from continuing his volunteerism. He is particularly proud of his ambassadorship with the Royal Society for the Blind (RSB) in Australia. RSB is a non-profit organization that focuses on providing services to people with severe vision impairments. He frequently speaks on behalf of the organization and promotes them on social media.

Check out a preview of Derek’s movie: http://beyondsightmovie.com/

Inspired by Derek’s Story? Apply for a guide dog today!