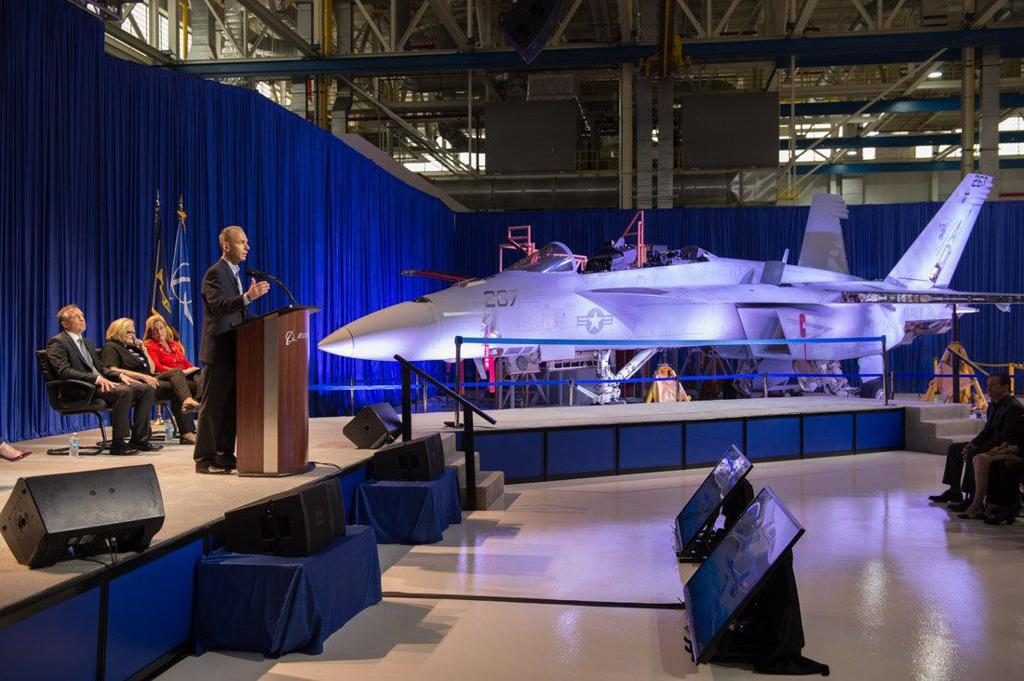 May 4, 2018
Boeing executives, including president and CEO Dennis Muilenburg, welcomed on Friday the first of potentially hundreds of well-used Navy F/A-18 Super Hornets that will return to the company’s north St. Louis County campus for upgrades designed to extend the life of the Navy’s workhorse aircraft.

The fighter jet, with just under 6,000 flight hours under its belt, is one of four Block II Super Hornets that will be delivered to Boeing this year to undergo an 18-month Service Life Modification (SLM) program meant to extend the flight hours of the aircraft carrier-based fighter to 9,000 hours.

Moving forward, funded by a $73 million contract awarded by the Navy in February, Boeing expects to see more than 40 Super Hornets per year come through its St. Louis facilities for the upgrades, which also will include new touch-screen cockpit computers for pilots, more advanced targeting and data systems and new fuel tanks to increase range.

More than 350 jets are slated to be upgraded, though some of those aircraft will be worked on at a Boeing facility in San Antonio.

Along with new Super Hornets Boeing will soon build for the Navy, the improvement program will “keep this fleet healthy and strong and doing the work of the Navy well into the 2030s and stretch into the 2040s,” Muilenburg said.

The program means more work for employees at Boeing’s massive production facility next to St. Louis Lambert International Airport, but probably won’t lead to a large boost in new jobs. Still, it’s a boost for the company’s operations, providing work well into the next decade. Just a few years ago, many had expected the Super Hornet line to begin winding down.

The jets are in need of upgrades sooner than the Navy expected because they’ve been in the air so often since 9/11, said Rear Admiral and Program Executive Officer for Tactical Aircraft Programs Michael Moran.

“We figured we’d have about five more years,” before the jets would hit 6,000 hours logged, he said. “So we have to do something to extend their life.”

Moran said the SLM was a unique modification program for the Navy, which typically upgrades structural components of its jets to extend the life of its fleet.

“Here, we’ll do that, but also check on the material condition of the subsystems” and upgrade its capability to the next generation of Super Hornet technology, he said.

Dan Gillian, Boeing’s vice president in charge of the F/A-18 and EA-18 Growler programs, said the next Super Hornet in need of upgrades should be delivered to Boeing toward the end of the summer. And eight more jets are expected to be worked on here in 2019.

Gillian said previously that as the program ramps up, over time it could result in an increase of “several hundred jobs” across the Super Hornet production line. For now, a much smaller team will be working on the jets as Boeing is just in the engineering phase of the program.

The first Super Hornets will take about 18 months to undergo the necessary upgrades, but Gillian said the company would refine the process and get the time it took to upgrade them down to a year.

The planned upgrades and new U.S. orders of Super Hornets could help Boeing market the fighters to more international customers, some of whom had been asking whether the production line would be around for much longer.