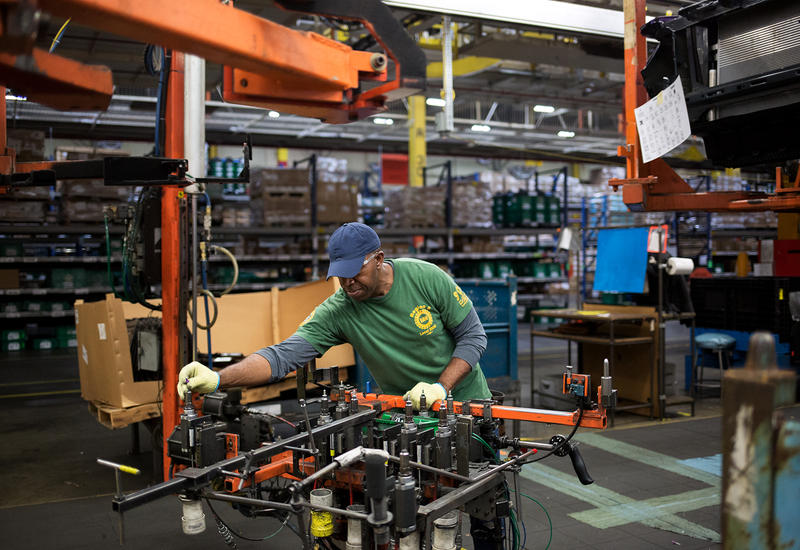 Workers at the General Motors Wentzville assembly plant (pictured above) are on furlough. But other manufacturing workers considered essential must still report to work, though many fear for their health.FILE PHOTO | CAROLINA HIDALGO | ST. LOUIS PUBLIC RADIO

The coronavirus outbreak is changing the way many people work — and whether some report to their jobs at all.

Local governments in the St. Louis region recently restricted gatherings to 10 people or fewer, and many have ordered residents to stay at home in an effort to stop the spread of COVID-19.

Businesses are being encouraged to allow employees to work from home or implement social distancing techniques for those who can’t. But that doesn’t apply to “essential” manufacturing.

While many plants in the region are staying open because of the products they produce, General Motors recently closed its Wentzville assembly plant.

UAW Local 2250 President Glenn Kage, who represents about 4,500 workers in Wentzville, said he pushed the company to close.

“You cannot say you’re following government mandates for the safety of our members by asking them to come in and work shoulder to shoulder with 1,500 people,” he said.

Kage said the auto manufacturer sent employees home on furlough after the second shift on March 20 and encouraged them to apply for unemployment benefits.

Between that and a Supplemental Unemployment Benefits Plan, Kage said, workers will get about 80% of their usual paychecks. They will continue to receive health care during the downtime. But, he said, the union is still fighting to protect temporary workers, who will lose seniority if they are out of work for more than 30 days.

As GM closes its doors, other manufacturing workers in the region wonder why their employers are still asking them to go to work.

Olin’s Winchester division in East Alton, Illinois, manufactures ammunition, including for the military, which makes it an essential business.

Tracy Gardner, a business representative for District 9 Machinists, represents about 400 union members working at the manufacturing plant. He said he began fielding calls about a week ago from members concerned about their health.

The biggest worry he hears from workers is fear that someone may have contracted the virus without knowing it and could be spreading it to others on the job.

“If someone has a broken arm, you can see they have a broken arm. In this case, if someone is sick, you might not know they’re sick,” Gardner said.

He said workers have jobs that don’t allow them to stand six feet apart from one another, but he is encouraging more social distancing during lunch breaks and during shift changes.

In a statement, the company said it has implemented pandemic plans at all facilities based on guidelines from the Centers for Disease Control and Prevention and the World Health Organization. “During these challenging times we continuously seek best practices to ensure the health and safety of our employees and their families,” according to the statement.

“The unknown here is how long are they going to maintain clean antiseptic wipes before they run out? Things are a little hard to get right now,” Gardner said.

Soon, employees will be required to have their temperature taken at the start of every shift. Plus, they’ll be given more time at the end of shifts to sanitize their workstation. Gardner said Wednesday he wasn’t aware of any union members who had tested positive for the virus.

Employees are allowed to take unpaid time off to stay at home with their children, who are out of school for at least a few more weeks.

The same rule applies at Boeing and GKN Aerospace plants in the region, Earl Schuessler said.

He’s IAM District 837’s president directing business representative. The union represents employees in aerospace manufacturing, including more than 2,000 workers at Boeing and about 600 at GKN Aerospace.

Schuessler said the manufacturing plants are both considered essential and will stay open.

“We manufacture defense-related products — 99% of our work — and we’ve been asked by the Pentagon, all branches of the military, to continue our work,” he said.

As of Thursday afternoon, Schuessler said he wasn’t aware of any positive tests for the virus at the plants, though 70 people across the two companies have been asked to self-quarantine with pay. Individuals who are sick, but not with coronavirus, must stay home without pay.

Schuessler said many union members have reached out to him expressing fear about going to work.

“These individuals have to make that decision on jeopardizing or risking their safety to come to work, possibly be exposed, versus voluntarily staying home without pay,” he said.

Schuessler said the companies have increased decontamination efforts but said they’re not up to the union’s standards.

The companies did not immediately return calls for comment.

He’s calling for a meeting with company representatives to bargain for worker safety precautions, including two weeks of sick time for employees to use as they choose, greater social distancing, daily temperature checks and hazard pay for employees who continue to work at the plant.

“We can’t build an airplane at home, I get it, but what both these companies need to be doing is making the employees feel safe at work,” he said. “And right now, I can unequivocally state at neither company do my union members feel safe at work.”