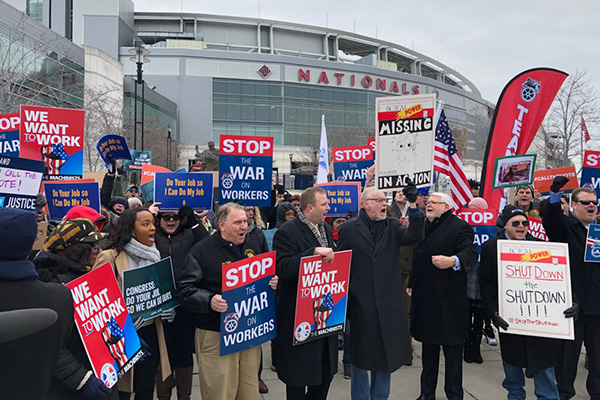 IAM members all across the nation are engaged in the battle to end the longest federal government shutdown in U.S. history.

IAM members several other unions recently held a rally  at the Nationals Park in Washington, DC where Senate Republicans were gathered for a retreat instead of voting on a House bill to reopen the government. Members gathered at the rally demanding  Senate Majority Leader Mitch McConnell to immediately call a Senate vote to end the shutdown.

“Tell Mitch McConnell that enough is enough,” NFFE-IAM Federal District 1 President/Directing Business Representative Randy Erwin told the crowd. “Every member of the Senate has families and entire communities in his or her state that are suffering.”

TAKE ACTION: Call our hotline at 866-803-8830 and tell your U.S. Senators to end the shutdown and put our federal workers and contractors back to work with pay.

Thousands of IAM members who work or contract for NASA, the U.S. Coast Guard, the U.S. Forest Service, the National Park Service and others are working without pay or furloughed due to the stalemate in Washington.

“Our members, their families and their communities are sick and tired of political rhetoric and demand an immediate solution to the bickering in Washington,”said Machinists Union International President Robert Martinez Jr. “The government should be open immediately. IAM members are ready to get back to the work of serving the American people.”

WATCH: Steve Ching, an industrial high-voltage technician and federal contractor for NASA at Kennedy Space Center in Cape Canaveral, FL. spoke with CNN via Skype about the Government Shutdown and how it’s hurting American Workers

If you live in the Washington, DC area, attend tomorrow’s action at the Hart Senate Office

TAKE ACTION: Call our hotline at 866-803-8830 and tell your U.S. Senators to end the shutdown and put our federal workers and contractors back to work with pay.

Martinez has directed the IAM Government Employees Department to gather the following guidance to assist members affected by the government shutdown:

Table of Recent Changes to Guidance

Visit 211.org to locate organizations in your community that provide support and assistance to working families.